She be addicted to da Dachshunds!!!!   How else do you explain a woman who has had 16 dachshunds in her life.......and for a time, she had SEVEN at the same time.

Now, the way she sees it.....right now she has ONLY four.   Butt to most peoples (Uncle Tommy especially) dat be more than enoughs.   One of the steps to conquer addiction is to recognize and admit you haves a problem.....Well, my mom does recognize she has this issue, butt that is as far as she gets in her 12 steps to recovery.  (She is hopeless)

Since it be almost two whole years since she adopted me, she be starting to 'get the itch' to finds another dachshund for our 'family'.  One of her 'hobbies' is to surf the dachshund rescue websites, and ooh and aah over all the beautiful dachshunds dat be needing a home.  And she has it in her 'mind' (what little there is of this) to next get a red short-haired dachshund........this would match the dachshund Uncle Tommy had painted on his Harley AND we currently do not have a red short hairs in our family.

Sooooooooooo, look who she is currently in absolute loves with at one of our local rescues..... 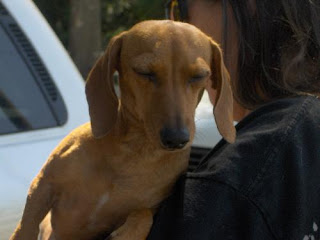 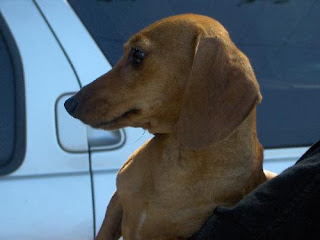 Isn't she BEAUTIFULs ?!?!?!?
and, as an added bonus......my mom thinks she looks a bit like everybuddys gal pal, Puddles!!!  Do you sees the resemblence??

Next step is to trick   convince Uncle Tommy that another dachshund family member is a good ideas without hims pitching a fit, getting mad, using lots of HBO words    disagreeing.

will keeps you updated...

Well hello there!! Nice to meet you too! Thanks for stopping by to wish me a happy Birthday!!
I will be your newest follower too! I love making new furiends!

Minna we actually thought it was Puddles....HA
I thought Ms. Puddles had copped an attitude and was moving to Texas.
Tell Mom we hope she is able to convince the Uncle that one more itty bitty teeny tiny lady Doxie will not take up much space but she might take up a lot of attitude room. MOL
Keep us posted.

Oh your mom betters furget them 12 steps cuz hers done gone to Looneyville and ain't nevers coming back.
Why is my mum shaking her head and screaming NOOOOOOOOOOOOO bout your mom getting dat purty little red head? Oh.....her says little red head girls are bad news...wait, LIGHT RED HEADS. Okays, you good to go then. It's best to be carefuls withs da light reds.

HA HA HA HA!!! Okay... I was Mommy's first puggy!! That IzZY all she needed!! Right!! Wrong!! She had to run out and grab two more!! WHATEVER!!
Then she goes and does volunteer work for Pug rescue and fosters 'da creeps who try to weasel there way into our home furever!!
Daddy is the only sensible one!!
If Mommy had her way.. she'd be one of those craZy ladies you see on day time with multiple animal hording.
She keeps begging Daddy for a 4th. It's really embarrassing.
Mommy is addicted to Pugs!! So she understands. I don't collect hoomans..wtf??

Whew! For a moment there, I thoughts you WERE adopting Puddles. I hear that her momma might be open to the right offer, you know. Specially if you gets her on the phone right after Puddles has jumped in her lap while she's on the potty. Heehee!

I bet your mom is sneaky enough - er - smart enough to figure out how to convince Uncle Tommy to gets a new family member. Shoot. I bets all those dachshunds together don't weigh as much as ONE labradude. She could get like EIGHT doxies and they still wouldn't take up as much room. So she can tell him that it all evens out in the long run. (Get it? LONG run? Cuz doxies are long? Hmmm...never mind.)

OMD - are you sure it isn't PUddles - even the expression is the same. We hope your wishful thinking comes to fruition.

That is cool that your mommy likes Dachshunds! Beth is addicted to Newfies! Sure is nice they like us!

Our human's the same about scotties. But she's only had nine. SHE is always looking at scottie puppies, but when she's walking three of us, she's reminded that that's all she can cope with.

We're with the others about that doxie. Is it really Puddles pulling another scam. Just be careful if you're asked to send money to support her.

PeeS There's no such thing as ENOUGH scotties, so we think that applies to doxies as well.

OMD OMD... it is another Puddles. Holy Cow!!! I don't think your mom has an addiction or an affliction. I think she is quite sensible. I'm just sayin'.

Oh, she sure is cute! Maybe it's not a good idea, though. I can already picture Puddles denying some of her more nefarious deeds and blaming them on her lookalike! The poor girl might suffer a lot from something like that!

Hee hee! We wish you and her lots of good luck!

Sure does look a lot like Puddles! Are we sure that's a good thing? Might act like her, too! lol We're just kidding! We love Puddles!
~Milly and Shelby

I hope you can convince your uncle!
She is adorable... Puddles II!
Kisses and hugs
Lorenza

There is no turning back now!! She looks like a keeper!

Oh Minna, she sure is cute. Mommy said she looks kinda like Puddles but she really looks like my angel sister Samantha.

I hope you get her!!

Why would your mom want to get a RED doxie (that of all things looks like PUddles!?)
When she could PROBABLY find a great looking black and tan doxie!!?

Ha. We thought it WAS Puddles at first, too. Umm, we're just wondering what YOU think about all this Minna? Will you still be gettin' all the attention you deserve if there's a new dog in town? Just looking out for ya...
The Road Dogs