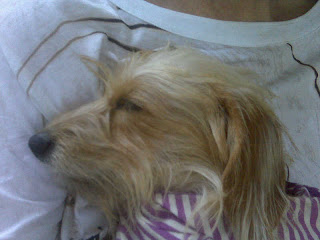 Little Miss NoName relaxing on my momma's shoulder. Her is cute, butt I gives her exactly ONE WEEK of this special treatments, then her has to 'share'.
Posted by Unknown at 10/20/2010 09:18:00 AM

I see some spoiling going on there! She's a lucky doggie!

MinnaK,
Her is makin' herself right at home. I thinks you is right to gives her a week to gets da special treatments, den sharing is good. :)

Minna
Blondie no name has been through so much. It's awesome that she is bonding so well to your mom.
Love Ruby & Penny

PeeS. We is very skeered that we is starting to think like Puddles... do you think there is an antidote?

Hey, Mama has two shoulders, just snuggle in there and take over the other one:)

wow you are super nice to give her a whole week. We would only give like 24 hours. heheh noname.

Oh hers is settling is just fabulously.
Her is gonna loves it...then her will learn to shares. I ain't into sharin' eithers BUT, mum says we has to share her..meaning mum, we has to share mum.

Oh, Minna! You're so nice to let her have some cuddles with your momma!
-Corbin

Minna
I thought of anothew name too, how about Petwa?

you'we being a sweet sissie to give hew a chance to get comfy in hew new home, but then all bets awe off, hehehe
smoochie kisses
ASTA

I hopes I would be able to share like you do buts I not sure if I can do it. She looks most happy tho
Lovs
Richie
xx xx

NAK and The Residents of The Khottage Now With Khattledog said...

She does look furry sweet!

My brother Butter would give her about 30 seconds, so you are pretty nice giving her a whole week!

Butter has a big baby fit whenever the momma even pets Uncle Fred.

Signed
Your non-jealous Who, Sugar

I 100% agree that us blondes have way more fun times. We are super cute, super fun, super cuddly. There is no way around it.

Minna
That is nice of you to share your Mom. They have to have this bond deal, then they should be ok by then. She sure is a cutie though!!

Minna, you better be careful! We blondes do tend to be heart stealers. We can't help it!

Being the big sister, it's so nice of you to share you momma while she settles in.. next Wordless Wednesday, I hope to see you on one shoulder and Miss NoName on the other! Or maybe someday... I knows that adding new sisters can take time to adjust!

Minna, she does look very content! Is she staying? Getting attached?
Wags
Ernie,Sasha,Chica

I think I might be smitten ... blondie no name is a beauty!

Minna
I hopes youw Mom got you that ice cweam. If not, you awe welcome at my house to shawe mine anytime
smoochie kisses
ASTA

Looks like your new sissy is making herself right at home!

Thank you so furry much fur the kind woofs you lefted on my bloggie about my Claudie. I see you losted a brudder too recently. I is so furry sorry. Your new sis duss look pritty. We placed a dog once wot looked just like her and named him Dexter but seein as yours be a gurl, that would not werk. You has the rite ideer. One week then all bets do be off. Same deal here with noo fosters. You dussn't want them to get spoilted with speshull treatments.

Oh my gosh she is cute. I can't wait to hear her new name :)

Hey Minna Krebs girrrrrl. We have gotta get a name for that Blond one... sooon. I still think RubyPenny is a grrrreat name, butt I might be a tiny bit Biased.
Now about this sharing of the mom thingy. I say... give the new girrrl 87 hours and then.. All is Fair in Love and Love. hehehe
I think you should shower the girrrrl with your Minnaness and she will leave your mom alone. At Least Pawt of the time (YOUR Pawt). Once she gets to know Puddles... well your problems will be.. YIKES>>> Maybe you had better not let her meet Puddles after all. I'm just sayin'.

OMD OMD OMD... I just thought of something... PUDDLES should have been there officiating for... her Bafftism.
Oh... WAIT... nope she can't do that YET... you gotta have a NAME to be Bafftized. WHEW You still have time to get this one stopped before Puddles jumps on it with all four feets.

MinnaK, I would say you're the sweetest sis in the whole wide world. It's so sweet and generous of you for sharing your momma with her. Let them have the bond first and you will have your momma back in no time.

She's a cutie! It's always hard to learn to share at first but before you know it, you'll learn to love her too.

Oh Minna! She is so precious! I think my momma just fell in love with her. I'm thinking you are probably used to sharing what with all the furiends you have at your house.
Snuggles,
Twix

Be patient, Minna!
She will be playing with you very soon!
Happy Wednesday!
Kisses and hugs
Lorenza

Awww... Miss Minna ♥
Your Sis is sooooo PRECIOUS!!!
Bella should be her name; she is just too Beautiful!!! after you of course ♥
Wow! Fun times at your house with a Brunette and a Blondie. You Girls are Powerful!!!

Lola and also Franklin, too said...

She's adorable, but I think you're being very generous in giving her a whole week. Speaking as someone who has to deal with a younger sibling myself.

Oh, she IS so cute! And you are a super terrific big sister for sharing your mom so nicely while she gets settled all in.

MinnaK...oh do I feel your pain. I don't like sharing my MOM at all!!! Butt remember little Miss NoName has been through a lot she needs extra TLC.

we's stop by to see how Woodstock doing...

You are awful nice to give her that long. I don't think I could share my mommy!

Yes! You were there first!

Oh Minna!! You and your sister are just gorgeous togethe. Mommy loves to see puppies sleeping. She says we all look so innocent


Sure hope you girls could come to Old Town Spring this Saturday. It wou;d would be fantasticto meet both of you. Use wires gotta stick together.

Awww, Minna. She just looks like she is making up from a lack of snuggles.

Woofs and Kisses!
The Fiesty Three

I have to warn you about sisters...
When you are not around, they take over your blog and start speaking some weird foreign language no one understands except The Anakin Man (He is smart).
I think we need Miss Cutie Pie Puddles' help to break the codes on their language...
So I suggest that you lay some laws of your land with your new Sis there because before you know it she will be taking over your bloggie in German perhaps?!

Minnia I think you are furry nice to share your mom like that. Your new sister is a lucky dog.