The Christmas Legend of the Animals

There is a wonderful legend shared by many countries that animals talk at midnight on Christmas Eve.

Now according to legend, at least, Christ's birth occurred at exactly midnight. Inside the stable, the animals watched in wonder as the new-born babe was lovingly wrapped in swaddling clothes and placed in a manger. Suddenly, God gave voice to the animals and immediately they began to praise God for the miracle they had just seen. This went on for several minutes and, just before the entrance of the shepherds -- who had hurried to the stable because angels had told them the Christ had been born there -- the animals again fell silent   The legend of the talking animals persists to this day in Scandinavia. And every Christmas Eve, wide-eyed children creep into stables just before midnight to hear the animals 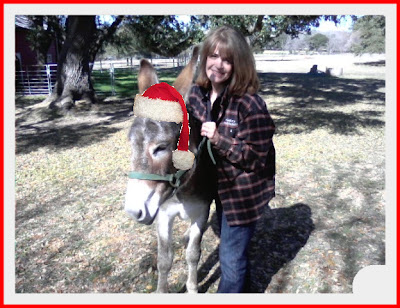 We will be spending Christmas at Lucy's House, so maybe my momma will sneak out to her barn at Midnight "just to check"


Here are a few other Christmas Animal Legends we found very lovely:


Native people of the Americas tell of deer who kneel on Christmas night, looking to the sky as if praising the Great Spirit. Cribs handcrafted by tribes of the United States and Canada include the fox, buffalo, and the bear in their mangers.

On Christmas Eve in Britain, bees gather to hum hymns and oxen and cattle rise in their stalls or kneel in adoration of the new-born king.


Spiders provided the original version of tinsel by decorating trees with cobwebs. Legends credit Santa or angels or Jesus for turning the gray webs into gold and silver. To this day, it is said that every tree should have a spider ornament to acknowledge the happy spirit of the Christmas spider.

Santa provides for the animals as well as children according to European legend. He places grain all about for them on Christmas Eve. Polar bear cubs know that Santa only comes after they go to sleep. In his off time, Santa is known to play with the animals around his North Pole home as well as feed and care for them.

Tabby cats received the letter “M” for Madonna on their forehead as a reward for a tabby kitten comforting baby Jesus in the manger.


The robin is said to have fanned the flames by flapping her wings all night to keep the new-born warm. The robin's chest became red from being kept painfully close to the flames for so long.

Wishing all our furrends a safe and happy and healthy Christmas !!!!!

Yappy Howlidays from the doxiekins in Prince Edward Island!

I'm interested in what Lucy tells your momma !!!
Merry Christmas to all of you!!!

Very interesting. Thank you for sharing. And by the way, I talk all year round....ha ha! Have a very Merry Christmas, my friends!

They also blog during da off season...animals I mean.
Nows dis was very interesting. I always wondered why people had spider webs on their trees. I thought it was just plain weird but now I knows why.

What will Lucy be serving fur Christmas Eve dinner?

Puddles
PS: Hope ya'll haves a most wonderful Christmas...love you all!

Fascinating Minna K! :) Never knew about what the animals did on Christmas night. Guess I fall asleep too early :D

Hopin Lucy shares some great gossip with your Momma tonight ;)

I did not knows some of that. I alreddy knowed that animals can talk but I is supposing the hoomans can only hear us at midnite on Chrissmuss Eve. Good to know so I dussn't has to watch wot I woof the rest of the time! Wishing all of you a furry Merry Chrissmuss from all of us!

What a lovely post. :)
Merry Merry Christmas my furiends!

We did chuckle a little, at the thought of Lucy talking, because we figure she would try to sell some Avon products....:)

Merry Christmas, Minna, Rooney, Ditto, Pickles, Lucy, Justice and of course Cheryl! Thanks for all the laughs!!

Thank you fur sharing these stories. Most impressive. I wish each and every one of you the most FANTASTIC Christmas EVER!!
from Frankie and FRANCINE

Very Bee-U-T-Ful stories and all very true. I wants to wish all of you there a very Merry Christmas (wit lots of pressies) Yeah...Yeah...Yeah

I had not heard of most of these stories! Thank you for sharing!

I hadn't heard most of these stories, very interesting!

I have heard the one about the spider. I don't like them AT ALL so I won't have on one my tree but I do like the sentiment.

We love those legends. Unfortunately, we were asleep all night, so we couldn't check them out!

Mom says 'The Night The Animals Talked' was always one of her FAVOURITE holiday animated works!

Oh,I love this post! I have lots to say and I am saving it for midnight and then look out! Tell Lucy I will give her a call and we can chat.

It's Christmas!!!!!!!! Yippie!
Just dropping by to wish ya'll a Merry Christmas and I hopes Santa brought ya'll lots of good stuffs. I has to wait fur my girl to get up to sees what I got...I think I should go wake her up.
MERRY CHRISTMAS!

What wonderful legends! Thanks for sharing - and happy holidays to you & your peeps!!