Well, furrends, my momma is all excited cuz college football is officially underway, and her Beloved Texas Aggies open their season at home on da sacred Kyle Field!

For those of you that don't know much about Texas A&M University, shame on you!  Heeeheee, Just kidding.
I am forced by my momma to write these posts under penalty of removal from da house or else   thrilled to share this with you.   By understanding her freakish obsession dedication you may gain some insight into my momma odd behaviors background.

Texas A&M was for years and years primarily a military school, and only started admitting da women in the late 1960s.   It is all well known for its pawsome Veterinary School....and has graduated tons and tons of some of da best Vets in da country!!  (if you like Vets that is....)


All this said......Texas A&M is full of Tradition.   And one of my momma's most favorite tradition is the mascot, Miss Reveille, 'mam!   You can just imagine how much my momma loved being at a school where a dog runs da campus!   When her was in college she would get all excited and filled with da nervousness when she would encounter Reveille on campus.  (pawsonally, I have heard dat Reveille is kinda 'uppity'....butt my momma don't care. My momma thinks of her as royalty.  sigh)

My momma loves Reveille sooooo much, that her furst two dogs after college were two Shelties.  Her thought they be like mini-collies and looked like Reveille.   THANK GOODNESS, her saw da light and returned to having doxins ever since.

Here be a few photos for your viewing pleasure........ 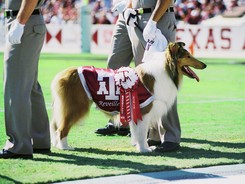 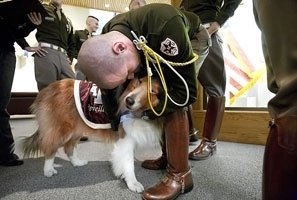 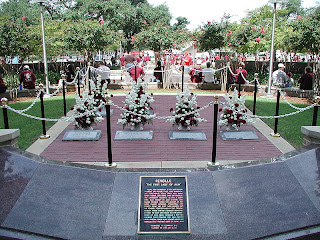 Also, if you reads da article below, you will see that all da prior Reveilles are laid to rest in a very prominent place on campus.....Every Reveille is named Reveille.  When a new Reveille assumes her duties, they just add a roman numeral to her name.   The current Reveille is Reveille VIII.  (my momma is not willing to let me share the number of da Reveille when her was in school....she figures you could count in dog years her advanced age)


I told you da Aggies take their Reveilles very seriously 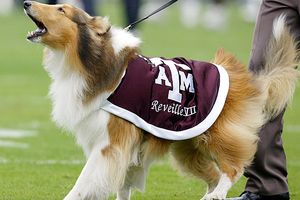 Reveille, the first lady of Aggieland, is the official mascot of Texas A&M University. She is the highest ranking member of the Corps of Cadets


Reveille I came to Texas A&M in January 1931. A group of cadets hit a small black and white dog on their way back from Navasota. They picked up the dog and brought her back to school so they could care for her. The next morning, when "Reveille" was blown by a bugler, she started barking. She was named after this morning wakeup call. The following football season she was named the official mascot when she led the band onto the field during their half-time performance. When Reveille I died on January 18, 1944, she was given a formal military funeral on the gridiron of Kyle Field. She was then buried at the north entrance to the field, as all Reveilles are, facing the scoreboard so that she can always watch the Aggies outscore their opponent. The next Reveille was not added until 1963, and Reveille II begain the tradition of using a female collie.

Reveille is the most revered dog on campus. Company E-2 has the privilege of taking care of Reveille. If she is sleeping on a cadet's bed, that cadet must sleep on the floor. Cadets address Reveille as "Miss Rev, ma'am." If she is in class and barks while the professor is teaching, the class is to be immediately dismissed.


Thank you for bearing with me through this.   Momma will un-tie me from da keyboard now that I finished dis post.
Plus, I gotta go check on hers.   I hear da gameday battlecry in da other room.   sigh.

Oh, those first couple paragraphs cracked me up! I promise not to reveal your mom's "freakish obsession and odd behaviors". My mom has some odd behaviors herself - like getting up at 6:30 a.m. on Saturday and starting to clean the house. Can't a dog sleep in on a Saturday morning?

Miss Reveille is quite stunning! Have fun!

MinnaK - I can't tell you how much I enjoyed reading this post. I've even been barking at my asst. & the Old Guy to read it too. I think everything about this tradition involving Reveille is really cool... her name for starters, and the shrine for Reveilles who have died, and the respect she's given on campus... everything. I think I'll just have to start rooting for Texas A&M.
GO AGGIES!!!!!!!!!!!!!!!!!

Thanks fur indulging your mom and sharing the tale!

I be's thinking dat comment from da Elgins is proof dat they has lost their marbles! I gots da hospital on speed dial...let me know when you thinks I should call.
Anyways, on to your most informative post...you mom is a little wacked too...hehehe! Now I knows why they use da collie but shouldn't they upgrade to a doxie?
Make sures you get a foto of your mom withs her foam finger...hehehe!

We could do that job! Actually, we need a bit more respect for the dog here!

Our TX relos like the Longhorns. Can we still be friends?

How cool would that job be?! Wow! You know, Southern Illinois has a Saluki mascot, though! Tee hee! I'm glad you got away from the computer in time to see the game!

What a wonderful story!!
I only knew about UGA, the Georgia bulldog, but now I know about Miss Reveille too!

I know you keeps tellin' us to start our blog..We haven't posted yet, but we've been reading you r blogs.... Our Daddy hasn't givn us purmission to get on the computer yet (he sez we can when we are 2 -it's commin' up....)

Daddy tells us all the time about your Momma’s Aggie traditions…. ‘specifically how weird your Mommy gott when Reveille came onto the field….. Fact he said he always wanted to move outta’ the horseshoo when she started yelling…… Then there was this time when that band member dressed in Sunny Orange (he won’t even let us say the name of the skool – but you can get whos I’m speaking of) came onto the field – She is totally obsessed – Geesh – What do they do to peoples at that skool? It’s like some movie where people go in , but come out diffrent . We are glad to hears that your momma has mellowed a bit in her old age…. She even has some friends that went to that skool…But, I digress….

Sorry Auntie made you speak of all that stuff….. have you recovered yet?

When’s the new Sis commin? What’s her name? Look for our post soon,

Love ya’ and watch for our blog….