I thought I was good at Roaching, butt this is this is crazy...

You prolly dont knows this, but I have a 'half-brudder' Justice. We don't look too much alike, but we DO haves sumthing in common.....Roaching!

Now, it is a well known fact that weinerdogs love to roach. But I cants compete with this "Super Size" Roaching...... 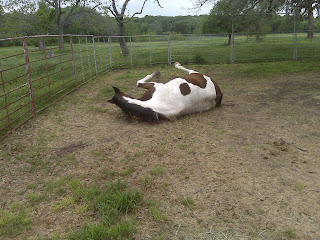 Don't worries everybuddy...I know it looks like he was having some kind of conniption fit or sumthing, but Justice was in the corral to have some fly sprays put on. He stands all nice to get fly sprayed, but as soon as its over, he loves to roach in the dirt!


I said he was my 'half brudder' but he does not live with us here in the city...he lives in his country house with my sissie, Lucy (much MORE about her laters). Actually I thinks my brudder Rooney and 'half brudder' Justice looks alot alike..... 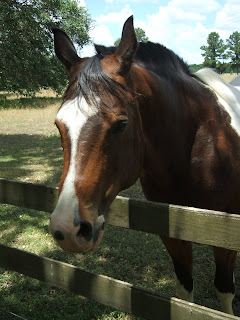 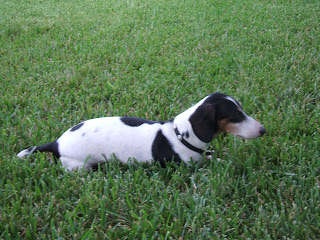 Notice the similarities?? Okays I admit that Rooney is a little shorter, but other than that, I thinks they could be twins! BOL!

Doxies roach?????? Just kiddin...hehehe!
Maybe Justice and Looney...I mean Rooney just haves different dads, you ever thinks bout that? I'm here to helps you out with all thiese complexities in life.
Puddles

The Army of Four said...

Oh, yeah! They look a LOT alike! If you hadn't captioned the pictures, I may not have been able to tell the difference. Ha woo!
We like to roach on top of Mom's fluffy quilts.
Luv,
Dave
PS: Thanks for stopping by the Ao4 Digest! It's great to meet a new friend! And TEXANS! (I'm originally from Texas, even though I'm from the shelter here in KS.)

Oh yes, twins, FOR SURE!

Rooney is a very handsome fellow! Mom grew up with horses and said it could be worse. Her white mare always roached under the blackberry tree, so she had purple spots all over her!

P.S. We greyhounds are fond of roaching, too!

Yes, I see the resemblance - especially in the face!

Hmmm.... yes... just a little difference in size but could be twins!
Roaching is pawesome, right?
Kisses and hugs
Lorenza