We Are Loved! and the New Motorcycle

Furst off, we have to wish a belated birfday to Uncle Tommy aka HarleyMan! We was so busy with all the celbration activities for hims this weekend, that we didn't post our well wishes to him heres!

Seconds off, I haves to show you a really WONDERFULs thing that he dids for US.


I haves to give you a little background informations, so you will be ables to appreciate it. Now da reason we calls him HarleyMan, is cuz thats how our Moms referred to hims when she furst met him, and befores they fell in love (sigh). Now, he has this name OBVIOUSLY (duh) cuz he rides a Harley motorcycle....but he takes it to da extreme! (Mom's description, not mine) He loves his Harley almost mores than Moms loves her dachshunds!! (unfathomable, ain't it?) Whens he isn't riding it, he is cleanings on it or spending his greenpapers to buy things for it. (and Mom sez Harleys use up ALOT of greenpapers!)

Well, bouts six months ago, HarleyMan bought a brand new Harley. (I thinks he had to load up his truck full of greenpapers to buy it) With the new bike, he has spent more time than ever, tinkering wifs it and getting it 'just right". So one day, he takes the new Harley to a mans that does specialty painting to puts some pin-striping on it. (all the while, Moms keeps wondering why he has to do so much to a NEW motorcycle)


I knows you are getting antsy bout this.....so here comes the good part.... When he takes Moms with him to pick up the new Harley and see the pin-striping (lets say she was less than excited at this point) she found out that he had asked the paint man to put a SPECIAL SURPRISE on da back!!!! We couldn'ts believe it!! The Uber-Tough, Tatooed, Leather Wearing Harley Man is now sporting a painted on DACHSHUND on da back of his new Motorcycle!!! 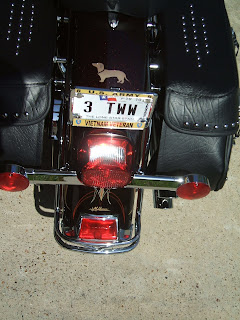 MinnaK
PeeS......our Moms thinks he did it cuz he loves her so much. We keeps letting her thinks that...but we REALLY know its because he loves us dachshunds!!

MinnaK,
That's so cool!
My mom and dad both rides Harleys and neither one of thems has a boxer on the back of any of their motorcycles. I am going to have to have a serious discussion with thems and soon!

That is way cool! Mike wants a Harley but settled for an RV.

Minna K. That is the grrrrrreatest thingy ever!! I can NOT believe my eyes. Are you Sure it is REAL, not just a wash off thingy like a fake tatoo?? OMD OMD this is grrrrreat. I hope you give him an extra lick or two. Do you get to ride on the Harley???

Now that is just the coolest! Do you have one of those cute Harley Davidson collars to wear so you're coordinated?

Oh I knows, he could rename it ...Harley Dachshund...get it? You see, I replaced Davidson fur Dachshund. Okay, let me be then.
That is awesome that he did that fur ya'll. I knows he said he did iy fur your mom but I thinks he just be saything that. We are dachshunds and peoples fall in loves with us aaaaall da time.
Hey you kknow what, My mum's brudder is a tattoo artist...hehehe.
Puddles

The Adventures of the LLB Gang said...

WOWOWOW!! Our uncle is a harley man too...So we know how much your uncle must love your Mama!!!

The Life of Riley said...

What a great honor - does this mean the next step is you get to go for a ride?

SUPER PAWSOME~!! :D
daddi wants an old bobber from the 40s or 50s--or at least that's what i always hear him say. what is a bobber anyways? isn't that the person that tries to grab apples on halloweens??

Very cool! You doxies get to have all the fun!

That just pwooves how much he loves you and youw mama and plus, hewe is the goodestest pawt too.. a weal man(which he obviously is) is not afwaid to show the wowld that he has a soft side too
Huwwah fow youw Hawleigh man
smoochie kisses
ASTA

That is tasteful and cool as hell!

miss minna! that is totally awesome sauce! i love the little wiener doggie on your harleyman's new bike!! i think now you need to name the bike somethingie doggie-ish...like the wiener dog hog. heehee.
*woof*
the booker man